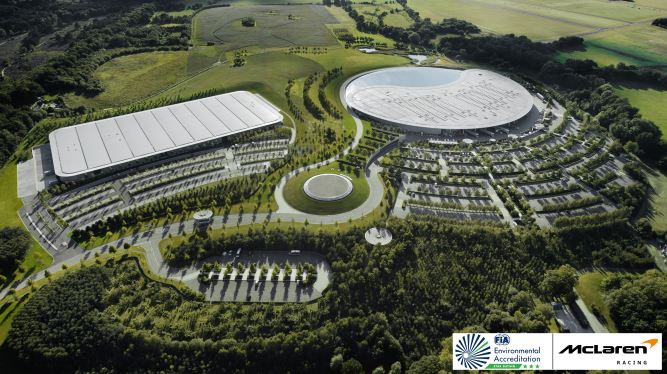 McLaren Racing today announced that it has been awarded three-star environmental accreditation by the FIA ​​for the ninth consecutive year.

The FIA ​​Environmental Accreditation Program aims to help global motorsport and mobility stakeholders measure and improve their environmental performance. By introducing a clear and coherent environmental system, it provides a three-level framework to accredit their activities.

Since first gaining accreditation in 2013 and becoming the first Formula 1 team to do so, McLaren Racing has consistently demonstrated its leadership within the motorsports industry with a number record of accreditation renewals.

The three-star accreditation recognizes that McLaren Racing operates at the highest level of the framework, demonstrating best practice and a commitment to seek continuous improvement through the implementation of an environmental management system.

Felipe Calderon, President of the FIA ​​Environment and Disability Commission, said“I congratulate McLaren Racing on its significant achievement in renewing the FIA ​​Three-Star Environmental Accreditation, which demonstrates the strength of its long-term commitment to environmental sustainability. McLaren has become the premier motorsport organization in the world to receive FIA ​​Environmental Accreditation in 2013. Actions taken since then have brought McLaren to the highest standards today in accordance with the three-star level.This award is recognition that McLaren Racing has consistently been at the forefront of advanced innovation to create a sustainable sport for the future and marks another milestone in this ongoing journey.

Kim Wilson, director of sustainability at McLaren Racing, said: “McLaren Racing has a heritage of sustainable leadership, and we recognize our responsibility to provide solutions to sustainability challenges through our people, operations and practices. Receiving the FIA ​​environmental accreditation for the ninth consecutive year shows that we are continuing to take steps in the right direction, but we know that we still have a long way to go. We will continue to focus on implementing a circular mindset and educating our staff to increase environmental awareness, alongside the areas of improvement recommended by the FIA.

The Fédération Internationale de l’Automobile (FIA) is the governing body of global motorsport and the federation of the world’s leading mobility organisations. Founded in 1904, with headquarters in Paris and Geneva, the FIA ​​is a non-profit organization. It brings together 244 Member Organizations from 146 countries on five continents. Its member clubs represent more than 80 million road users and their families. The FIA ​​promotes safe, sustainable and accessible mobility for all road users worldwide. More details can be found on www.fia.com

About the FIA ​​Environmental Accreditation Program

The FIA ​​Environmental Accreditation Program aims to help motorsport and mobility stakeholders around the world measure and improve their environmental performance. By introducing a clear and coherent environmental management system, it offers stakeholders a three-level framework to accredit their activities:

3. Three Stars – Best Practices: Demonstrate best practices and a commitment to seek continuous improvement through the implementation of an environmental management system.

McLaren Racing was founded by New Zealand racing driver Bruce McLaren in 1963. The team entered its first Formula 1 race in 1966, since when McLaren has won 20 Formula 1 world championships, more than 180 grands prix Formula 1, the Indianapolis 500 three times, and the 24 Hours of Le Mans on his first attempt.

The team competes in the FIA ​​Formula 1 World Championship with Lando Norris and Daniel Ricciardo, the NTT INDYCAR Series with Arrow McLaren SP drivers Pato O’Ward and Felix Rosenqvist, and the Extreme E Championship with Emma Gilmour and Tanner Foust.
McLaren was the first team in F1 to receive the Carbon Trust Standard in 2010 and have retained it on a half-yearly basis ever since, most recently in February 2021. The team was also the first in F1 to receive the FIA Sustainability Accreditation Award at a three-star level in 2013 as part of the FIA ​​environmental certification, before becoming a signatory of the United Nations Sport Pledge for Climate Action in 2021.